Home » GENERA M-O » Othonna » Othonna ramulosa
Back to Category Overview
Total images in all categories: 11,506
Total number of hits on all images: 6,514,435 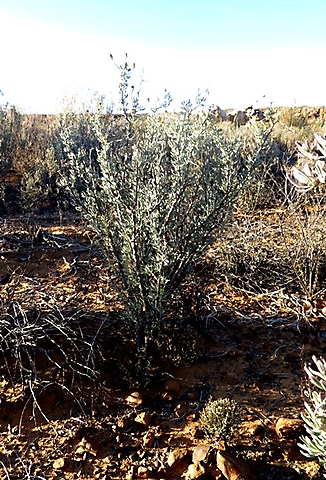 Othonna ramulosa is an erect, hairless shrub reaching heights to 1,5 m. The blue-grey plant in picture has an inverted cone-shape, resulting from few rigid, straight branches radiating around a vertical axis from the basal stem.

The specific name is derived from the Latin word ramus meaning branch, referring to the plant’s numerous small branchlets bearing leaves and flowerheads.

The species distribution is in the Western Cape from Ceres to Worcester and the west of the Little Karoo. The photo was taken at Kagga Kamma.

The habitat is rocky, karoid slopes covered in scrub, renosterveld or fynbos in sandy or clayey soils. The species is not considered to be threatened in its habitat early in the twenty first century (Vlok and Schutte-Vlok, 2015; Bond and Goldblatt, 1984; iNaturalist; http://redlist.sanbi.org).