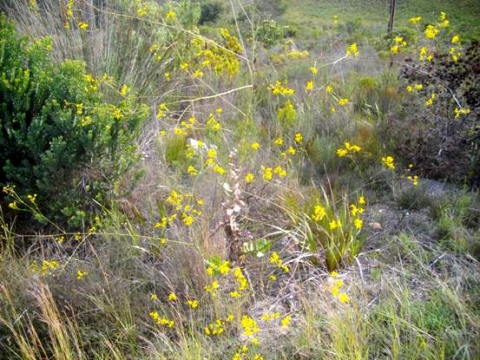 The flowering of a mature Othonna quinquedentata plant, yellow daisies bouncing about in all directions in the wind on their long stalks, can be quite an unusual sight in the fynbos. Still, the plant is not too likely to become a gardener’s favourite. It has more chance of being noticed as an unusual species in the veld.

O. quinquedentata can be observed along rocky, sandstone slopes in the southern coastal region from the Cape Peninsula to the Eastern Cape. Damp spots on lower slopes may have large stands of these tall, wispy plants scattered in fynbos. They easily go unnoticed until they present remarkable inflorescences, such as the one in picture, high above much of the surrounding vegetation.

The plant may proliferate on disturbed land as a pioneer plant, to lose prominence later as other vegetation recovers (Bean and Johns, 2005; Manning, 2007; iSpot).