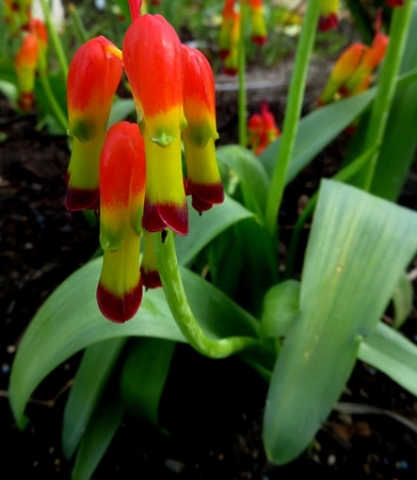 Previous
Image 1 of 60
Next

Lachenalia aloides var. quadricolor, commonly the Cape cowslip or in Afrikaans the vierkleurtjie (little four colour) on account of the four flower colours, is a winter-growing, summer-dormant bulbous perennial.

One or two lance-shaped leaves with rounded tips are grown annually, green or purple-spotted.

The flowers grow in a raceme on a usually erect, fleshy stalk, here appearing pale green with dull patches. The stalked, cylindrical-tubed flowers in picture are pendulous.

Their outer tepals are short, orange-red on more than two-thirds of their lengths, yellow or sometimes greenish yellow for a short bit and green on the swollen lobe tips. The inner tepals protrude by about the length of the shorter ones, yellow or green-yellow with a maroon-purple apical band. The six stamens, growing in one whorl are included in the perianth tube. Flowering happens from late autumn to midspring.

The distribution is on the southwestern Cape coast on rocky outcrops. The variety is not considered to be threatened in its habitat early in the twenty first century (Manning, 2009; Manning and Goldblatt, 1996; http://redlist.sanbi.org).