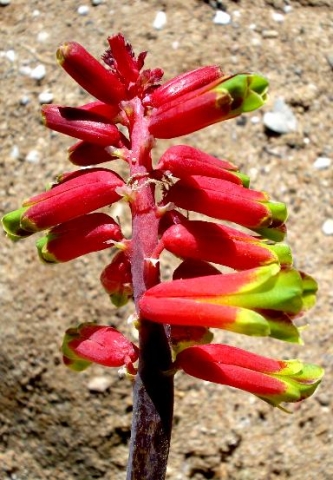 Lachenalia aloides var. aloides is a bulbous perennial that grows one or two lanceolate leaves. The leaves may be green or purple-spotted. The plant is commonly called the Cape cowslip or in Afrikaans the vierkleurtjie (little four colour) on account of the flower colours.

The flowers grow in a raceme on an erect, fleshy stalk, here appearing dark purple below the flowers, red amid them. The flowers are spread or nod from short pedicels. The tepal colours may include red, orange, green, maroon or brown and bluish green among the at least four variations of the species that have been named. The inner tepals grow markedly longer than the outer ones, concealing the anthers. Blooming happens from late autumn to midspring.

The distribution is in the south-western Cape on rocky outcrops. This photo was taken near Clanwilliam in August (Manning, 2009; iSpot; www.redlist.sanbi.org; Manning).