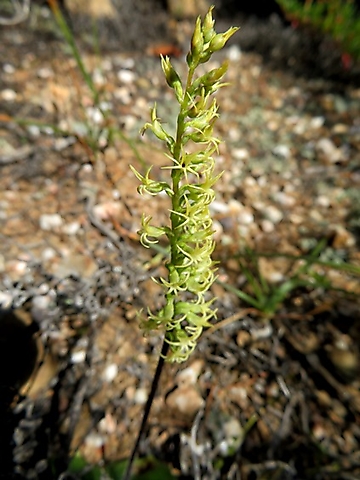 The often winter-growing plants are tuberous perennials, their stems usually hairy. The generic name, Holothrix, is derived from the Greek words, holos, meaning all, whole or entire and thrix meaning a hair, referring to the usually hairy leaves and scapes.

Most species are geophytes, growing in the ground, although there are lithophytes, species found on rock. The range of mastered habitats is large, including mountain tops and semi-arid shrubland. In nature the plants are often found under shrubs or sheltered among rocks.

Two rounded leaves (rarely one) grow flat on the ground, usually about opposite and one slightly bigger, enveloping the smaller one at the base. Some species of arid habitats have shiny, even slightly succulent leaves from water cells near the surface. This moisture serves to support blooming. Holothrix leaves may in some cases wither before flowering.

The small flowers mostly grow in a one-sided or secund spike. The sepals are unequal, joined at the base, usually inconspicuous; the petals longer than the sepals. The petals are white, cream, yellow or greenish.

The almost always resupinated lip (below) is mostly fringed or deeply lobed, the lobes from three to many. A small spur grows from the back of the lip. The fruit is an ovoid to oblong capsule.

There are about 55 Holothrix species, occurring in Africa, Arabia and Madagascar; 23 of them in southern Africa, notably the fynbos region, Namaqualand and the Little Karoo. Bartholina is closely related to Holothrix.