Home » GENERA G-H » Holothrix » Holothrix incurva among rocks
Back to Category Overview
Total images in all categories: 9,754
Total number of hits on all images: 4,378,715 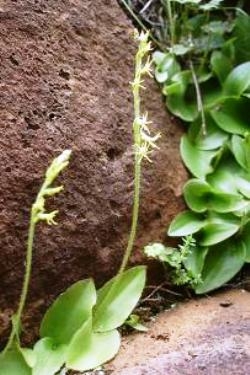 Previous
Image 7 of 37
Next

Holothrix incurva grows on damp rocky ledges and in shaded crevices of the Drakensberg. Some other members of the Holothrix genus occur in the arid parts such as the the Karoo. The Richtersveld, for instance, is home to H. filicornis, H. villosa, H. aspera and H. secunda.

Habitat adjustments of great variation are sometimes made by dissimilar descendants of the same ancestor. Life protects itself by using all options, therefore also all available territory. In doing so, the spreading pioneer plants in new areas adapt over generations to new challenges. Climate change is just another challenge faced successfully as long as functional responses are bred in offspring.

Without this response survival risk would escalate, when change is not being embraced. Liberalism is sometimes the route to survival, conservatism at other times. "You've got to know when to hold them, know when to fold them..." Plants and animals don't intellectualise this issue, they just breed maximally for chances to be optimised statistically. Not a thought for the possibility that their great-great-great-grandchildren will be nothing like them.

Evolving more new species continually is a byproduct of the universal urge to live through offspring. DNA and other attributes of the living and the dead are studied continually today, unravelling the endless secrets of speciation. Much changed in past generations of everything alive, as well as in dead end, extinct branches of the enormous family tree(s).

Some people living now want to know all about these things, as about all things, it's in their genes. Knowledge promises new options involving new risks, a continually renewing world for new people or their new name descendants yet to arrive in new jeans, or not (Williamson, 2010).