Home » GENERA G-H » Haemanthus » Haemanthus sanguineus fruit
Back to Category Overview
Total images in all categories: 9,402
Total number of hits on all images: 4,225,959 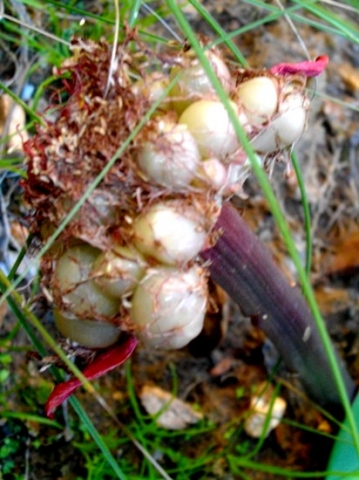 Haemanthus sanguineus is commonly known as April fool, probably relating to its typical flowering season. These fleshy berries see little sunshine next to the tall cliff where the plant grows. If it had been growing in full sun, the pale fruit would have been red, brighter than the dark maroon scape that holds the year's produce up for all to see. The translucence of the soft fruit surfaces might also have been less. The sturdy scape has a rough texture, is longitudinally furrowed and curves slightly.

Detritus of the spent corollas is still clinging to the cluster of unevenly sized globules. Two brightly coloured leafy bracts are persistent among the fruits. Such membranous bracts surrounded the brush-like flowerhead earlier.

These fruits are known to form part of tortoise diets, adding one known way of seed dispersal. The plant habitat is rocky outcrops and gravelly loam soils in variable fynbos and scrub veld; places where tortoises still roam if people are kind to them.

Late summer fires on the land where these bulbs are not yet flowering tend to increase the probability of blooms appearing (Vlok and Schutte-Vlok, 2010; Duncan, 2010).