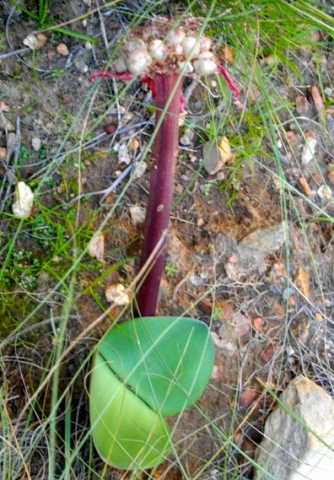 Haemanthus sanguineus is a geophyte that may reach 30 cm in flower. It is a long-lived plant, distributed along a broad strip in the south from Clanwilliam through the Little Karoo to Port Elizabeth.

Flowering occurs from midsummer to midautumn, before the two prostrate leaves appear. This plant was seen near the river in Meiringspoort during April shortly after flowering. It is still pushing out the new leaves, the fruits having already formed.

The broad, leathery leaves are usually glaucous with some red along their margins; neither feature is clearly evident on the specimen in picture. The leaves are usually wider than long, in the sense that length is measured from tip to base. An Afrikaans common name, veldskoenblaar (veld shoe leaf), was prompted by the feature of leaf appearance (Vlok and Schutte-Vlok, 2010; Duncan, 2010).