Home » GENERA G-H » Haemanthus » Haemanthus coccineus leaves
Back to Category Overview
Total images in all categories: 9,720
Total number of hits on all images: 4,361,980 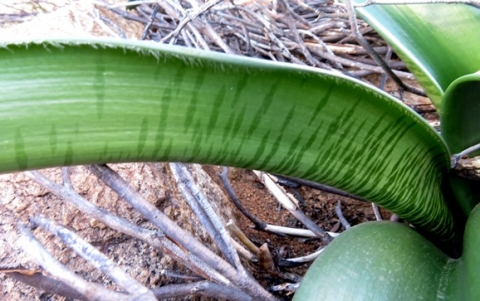 Previous
Image 5 of 18
Next

Haemanthus coccineus grows two or three spreading or semi-erect leaves annually per bulb after flowering. The third leaf may indicate comfortable conditions such as cultivation. The photo was taken in August in Namaqualand. This is a variable species, its leaves also quite variable.

The leaf is broadly to narrowly tongue-shaped, elliptic or nearly round. Leaf dimensions are about 6 cm to 70 cm long by 2,5 cm to 21 cm wide. The hairy fringe on the leaf margin seen in picture is often present, as is the up-turned lateral blade parts and the rolled-under margins. The blades are dull to pale green, thickish textured, longitudinally ridged faintly and smooth but for the margins.