Home » GENERA G-H » Haemanthus » Haemanthus albiflos
Back to Category Overview
Total images in all categories: 9,840
Total number of hits on all images: 4,464,633 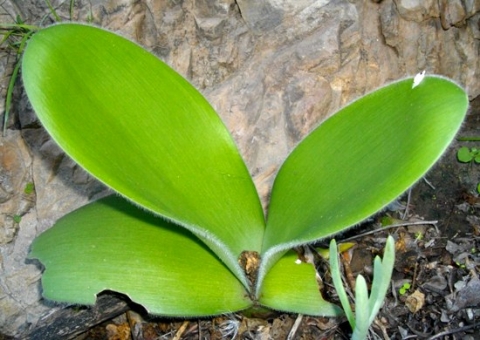 Haemanthus albiflos is one of the three evergreen Haemanthus species. Some other species among these bulbous perennials (about 22 in all in the genus, mostly South African, all southern African), produce flowers when there are no leaves present.

The broad, often pubescent leaves display faint white hairiness, on the plant in picture mainly near the margins. Leaf colour varies in shades of bright to dull green with occasionally some shine. The leaves grow at angles to nearly erect. Four leaves are common per plant.

The Rooiberg, where this plant was photographed, is near the western extreme of the distribution of the species. It is common in the Eastern Cape, the distribution extending along the KwaZulu-Natal coast (Manning, 2009; Bond and Goldblatt, 1984).