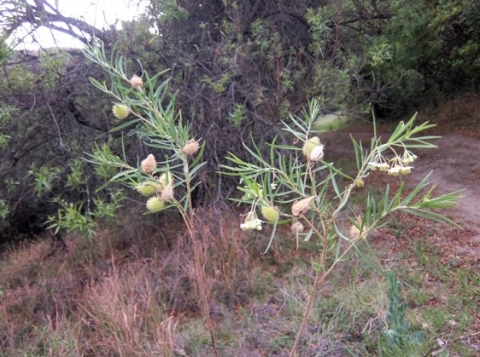 The branching in the upper stem parts of Gomphocarpus fruticosus (as well as below), is typical of the species. Several colour changes occur up the slender stems in picture.

The plant is common on disturbed land, sometimes becoming invasive on fields fallow for a few years. It often grows in clay or loam soils, but may succeed in about any soil. The roots are long, their reach deep. All plant parts are poisonous to livestock.

The species is not considered to be threatened in its habitat early in the twenty first century (Manning, 2009; Le Roux, et al, 2005; Vlok and Schutte-Vlok, 2010; www.plantzafrica.com; www.redlist.sanbi.org).