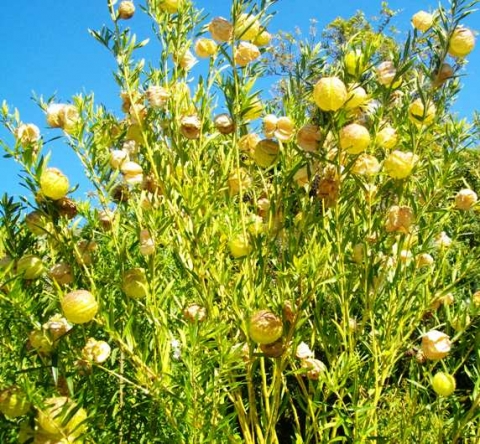 The flowers appear in pendulous clusters. They are preceded by creamy globose buds, sometimes tinted with green. When the buds open, the five petals bend backwards, presenting a central ring of five pouched corona lobes. Inside this ring are the (male) stamens and (female) carpels. The stamens are fused to form a staminal column that encloses the two carpels consisting of stigma, style and ovary. The two style tips are fused, forming the central style head, the five-lobed disc visible right in the centre.

The fruits are spherical, pale creamy green with soft green spines scattered along its surface. When ripe, the fruit bursts open to release many seeds attached to tufts of silky hairs that propel them on the wind in dispersal.

The balloon milkwood is common in large parts of South African, southern Africa and tropical central Africa. The plant has been removed taxonomically from the genus Asclepias. It now belongs in the Apocynaceae family that also houses Ceropegia, Stapelia, Adenium and many more milkweeds. The plant is pollinated by wasps that are important to it, as self-pollination does not work for this species.

G. physocarpus has become a weed in at least Australia, the Americas, Hawaii and around the Mediterranean. So, never import or export plants or seeds in any country without permission (www.plantzafrica.com).