Home » GENERA G-H » Gomphocarpus » Gomphocarpus tomentosus
Back to Category Overview
Total images in all categories: 9,390
Total number of hits on all images: 4,217,456 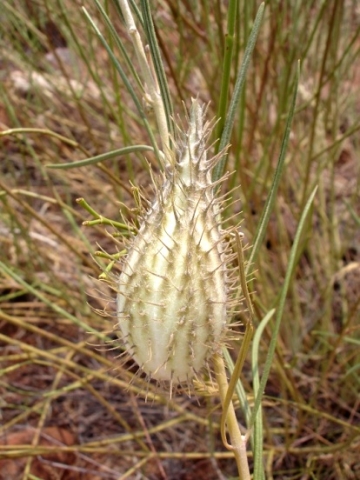 The fruit of Gomphocarpus tomentosus is an ovoid follicle that tapers to a long pointed tip, although it may sometimes be closer to spherical in shape. The follicle is borne erectly upon a twisted pedicel (stalk), appearing inflated or balloon-like. The surface of the follicle is whitish with longitudinal rows of long, thin, bristles growing on coarse ridges.

The generic name of Gomphocarpus is derived from the Greek words gomphos (a club, referring to the shape of the follicle) and karpos (fruit).

This plant was found near Kathu in the Northern Cape in December. The plant occurs commonly in the central and northern regions of South Africa, as well as in several neighbouring countries in southern Africa (iSpot; JSTOR; www.zimbabweflora.co.zw).