Home » GENERA C » Chrysocoma » Chrysocoma coma-aurea leaves
Back to Category Overview
Total images in all categories: 11,506
Total number of hits on all images: 6,514,463 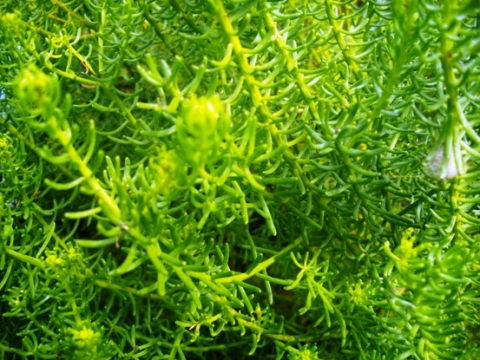 Chrysocoma coma-aurea is a leafy shrublet. Until the flowers appear this fact is very obvious. The leaves of C. coma-aurea are needle-like, fresh green with margins curving under. The leaves curve slightly inwards lengthwise towards the stem-tips.

The species distribution is confined to the south-western parts of the Western Cape, from the Cape Peninsula to the Overberg and Paarl. It is often encountered by hikers on Table Mountain.

The habitat is coastal flats and sandstone slopes where it grows in winter rain and flowers in the dry season. The species is not considered to be threatened in its habitat early in the twenty first century (Manning, 2007; Bond and Goldblatt, 1984; http://redlist.sanbi.org).