Home » GENERA C » Chrysocoma » Chrysocoma ciliata
Back to Category Overview
Total images in all categories: 11,506
Total number of hits on all images: 6,514,532 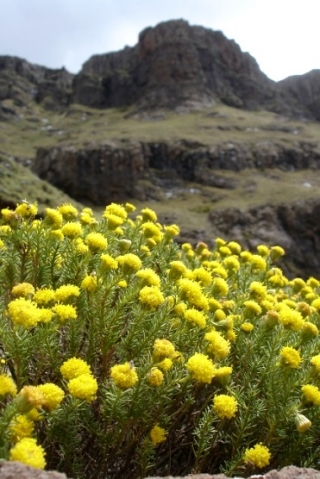 Previous
Image 1 of 14
Next

The stems are hairy (unlike those of C. coma-aurea), although the leaves are hairless. The bitterbos name suggests that the plant tastes bitter, but bear in mind its toxicity before checking.

The plant occurs almost throughout South Africa, apart from the far northeast, present in all provinces apart from possibly Limpopo. It also grows in neighbouring countries, at least in Namibia and Lesotho. The plant in picture was seen in the Mkhomazi Wilderness Area.

The habitat is widely variable, including rocky flats and slopes, the plants growing in most soil types. It tends to invade on poorly managed terrain. The species is not considered to be threatened in its habitat early in the twenty first century.

This plant (as do others from the genus) causes stock diseases, some known in Afrikaans as valsiekte (falling illness) and kaalsiekte (naked illness) or alopecia in (sheep) lambs and (goat) kids (Vlok and Schutte-Vlok, 2015; Manning, 2009; JSTOR; iNaturalist; www.epository.up.ac.za; http://redlist.sanbi.org).