Home » GENERA C » Chrysocoma » Chrysocoma tridentata
Back to Category Overview
Total images in all categories: 11,506
Total number of hits on all images: 6,514,472 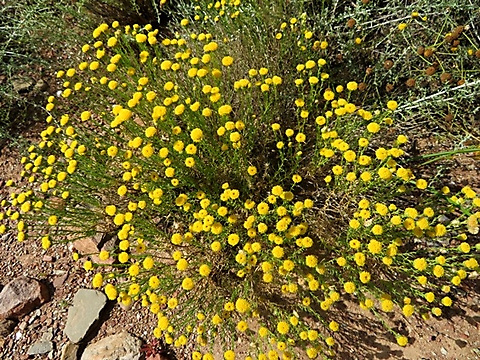 This Chrysocoma shrublet, thought to be Chrysocoma tridentata, was seen flowering during October near Barrydale in the western Little Karoo. C. tridentata branches much and reaches 35 cm in height.

The species occurs in the Western Cape, eastwards from Worcester, mainly in the Little Karoo and also at Klaarstroom north of the Swartberg Mountains.

The plants grow on flats and lower slopes among karoid scrub. The species is not considered to be threatened in its habitat early in the twenty first century (Bond and Goldblatt, 1984; iNaturalist; http://redlist.sanbi.org).