Home » GENERA B-C » Chaenostoma » Chaenostoma revolutum
Back to Category Overview
Total images in all categories: 8,940
Total number of hits on all images: 3,961,066 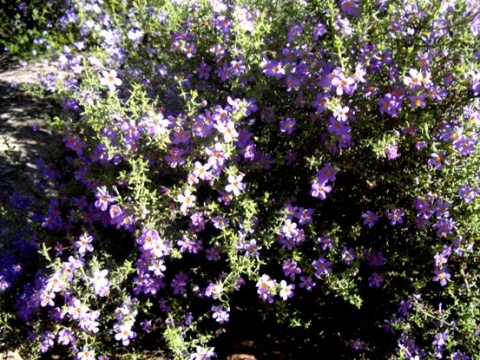 Chaenostoma revolutum, the fineleaf skunkbush, grows in clayey or loamy soils of lowland and higher slopes in the arid inland of the Karoo and Little Karoo, widespread from Clanwilliam to Baviaanskloof. Flowering happens almost throughout the year, but more from winter through spring into early summer and usually after rain.

The fineleaf skunkbush is much browsed by game and livestock. The plant does not resprout after fire; re-establishment happens from seed. It is not a threatened species.

There are 46 species of Chaenostoma, all of them in Africa and most of them found in South Africa. The genus used to be called Sutera. Reverting to the old name of Chaenostoma excluded three of the species in a revision (Vlok and Schutte-Vlok, 2010; Bond and Goldblatt, 1984; Manning, 2009).