Home » GENERA B-C » Chaenostoma » Chaenostoma caeruleum
Back to Category Overview
Total images in all categories: 8,965
Total number of hits on all images: 3,975,961 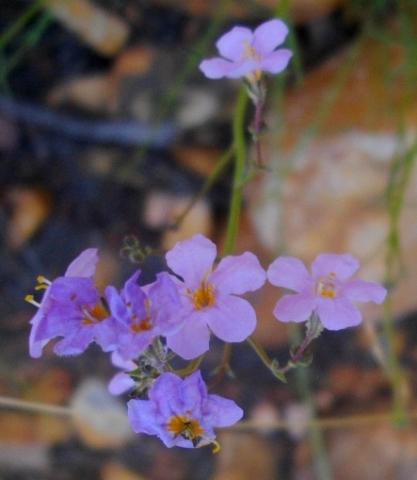 Chaenostoma caeruleum is an erect, perennial shrublet reaching heights of 1 m. It does not resprout after fire being single-stemmed. The leaves are up to 3 cm long, 1 cm wide and usually have sparsely toothed margins that are rolled under. Leaves and young stems are covered in gland-tipped hairs.

The mauve-pink flowers grow in long racemes. They are star-shaped with rounded petal lobes spreading to a diameter of about 1,5 cm. The corolla throat is orange-yellow, above a funnel-shaped tube of up to 5 mm long. The four stamens all protrude. Flowering happens in winter and spring.

The species distribution is mainly in the Western Cape, extending coastally into the Eastern Cape to around Humansdorp. The plant grows in diverse stony lowland habitats in clay or loam soils. The species is not considered threatened in its habitat early in the twenty first century (Manning, 2007; Vlok and Schutte-Vlok, 2010; www.redlist.sanbi.org).