Home » GENERA B-C » Chaenostoma » Chaenostoma hispidum leaves
Back to Category Overview
Total images in all categories: 8,984
Total number of hits on all images: 3,986,549 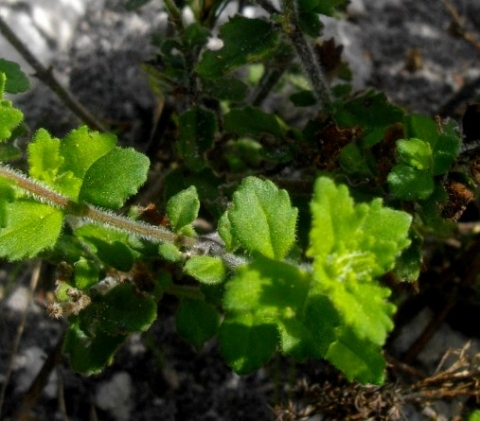 The opposite leaves of Chaenostoma hispidum are soft and hairy, growing on short stalks.

The leaves are decussate, each successive pair on the stem at right angles from the adjacent pairs, forming four arrays of leaves up the stem. Other plants may have their leaves arranged in two opposing ranks, referred to as distichous.

The leaf-shape is elliptic to ovate, tapering to the base, while rounded to pointed at the tip. The margins are coarsely and variably toothed, some teeth rounded in scalloped shape, others barely noticeable or elongated into oblongs.

The midrib is sunken on the upper leaf surface; secondary veins not clear to see. Leaf colour varies from yellow green to dark green (Privett and Lutzeyer, 2010; Bond and Goldblatt, 1984; iNaturalist; http://pza.sanbi.org).