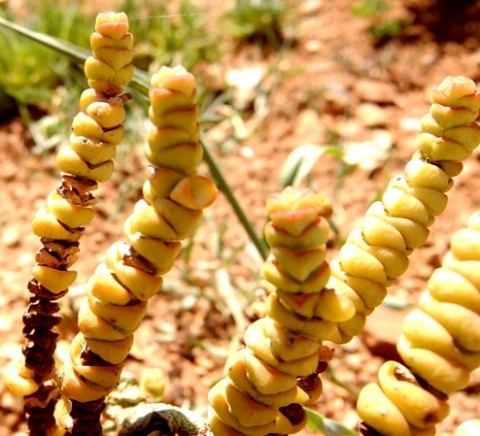 The sparsely branched stems are often erect, although sometimes decumbent and rooting at nodes. This is a dwarf version of C. rupestris, its stems covered in compacted leaves appearing columnar.

The thickly succulent leaves have a cropped, rounded shape. They grow in sessile pairs appearing fused at the back, but are lobed or heart-shaped and decussate (successive pairs positioned perpendicular to each other on the stem). Here they are quite yellow with some red margins, the leaves may be greener in shade and on new growth after rain.

The small, star-shaped, white flowers with a pink corolla tinge are grouped in dense, thyrse-shaped clusters at stem tips. The inflorescence stalks become up to 2 cm long, partly hidden behind upper leaves. Small, spreading bracts grow on these inflorescence stalks below the flowers. The stalks of individual flowers are short, hairless and purple.

The corolla tube of the flower is fused at the base, the five lobes spreading freely in typical Crassula flower star-shape. The anthers are brown.

The subspecies distribution is small, limited to the Anysberg, the Rooiberg and the Klein Swartberg. It grows in small colonies in rock crevices in Witteberg quartzite. The plant is rare, although not threatened early in the twenty first century (http://worldofsucculents.com; www.llifle.com; www.redlist.sanbi.org).