Home » GENERA B-C » Crassula » Crassula rupestris offering much
Back to Category Overview
Total images in all categories: 9,180
Total number of hits on all images: 4,098,715 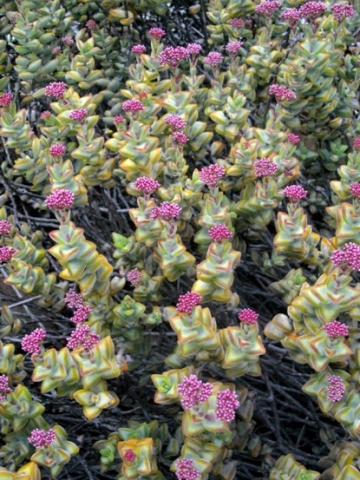 Its flowers not yet open, this Crassula rupestris plant already brings spectacular roadside charm in the Rooiberg at the end of May. The spreading, mature shrub has many-flowered inflorescences prepared at the tip of almost every tall stem. The flat-topped inflorescences are all presented at roughly the same height. The photo is early, flowering of the species only expected from midwinter or even later.

Spaced small leaf pairs occur on the erect stalks presenting each branched inflorescence. The stem sections covered in leaves are comparatively short. Much evidence of grey and bare, woody stems, poorly hidden below the flourishing parts, tell of many past years of leaf and flower production by this industrious plant (Vlok and Schutte-Vlok, 2010).