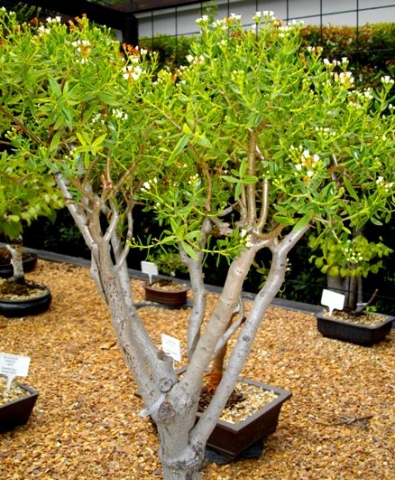 Crassula sarcocaulis subsp. sarcocaulis is a miniature succulent tree of up to about 40 cm. It is often considered as a natural bonsai. This is due to the spreading evergreen tree-like crown on the sturdy, pale grey stem. The stem is fairly smooth, sometimes with gnarled parts. The to be expected common names of bonsai crassula and in Afrikaans bonsaiplakkie are then also readily found in the literature.

The distribution area of the species includes mountainous grassland from the Eastern Cape, inland KwaZulu-Natal, eastern Free State, Mpumalanga and Limpopo. It is often found among rocky outcrops. The other of the two subspecies of Crassula sarcocaulis, viz. subsp. rupicola, occurs in parts of the same habitat, particularly the Drakensberg and Lesotho (Onderstall, 1984).