Home » GENERA C » Crassula » Crassula dichotoma ring around the mouth
Back to Category Overview
Total images in all categories: 11,246
Total number of hits on all images: 5,961,339

Crassula dichotoma ring around the mouth 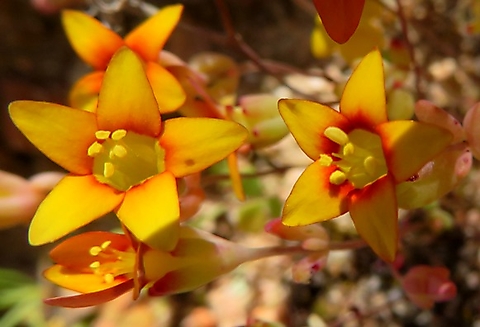 The orange-red ring around the yellow-flowering Crassula dichotoma corolla mouth is variable, sometimes faint or absent. Some flowers have a distinct, red, V-shaped marking at the base of each petal lobe, instead of the gradual colour phasing seen here. The corolla cup may then also be dark.

In picture there is a faint red margin on the petal lobes as well.

Sometimes referred to as the gold stonecrop or the yellow crassula, the petal lobes are deeper yellow than the pale to lemon colouring inside the flower cup (Grenier, 2019; Frandsen, 2017; Smith, et al, 2017; Le Roux, et al, 2005; Manning and Goldblatt, 1997; iNaturalist).