Home » GENERA C » Crassula » Crassula dichotoma
Back to Category Overview
Total images in all categories: 11,769
Total number of hits on all images: 6,918,752 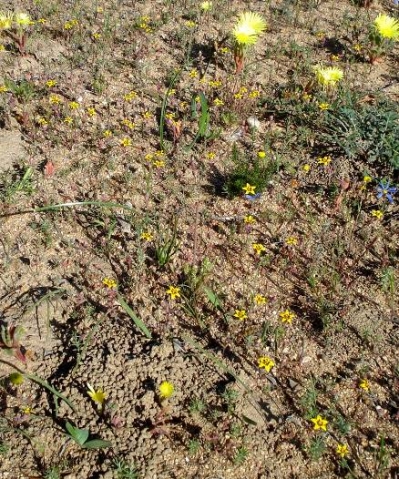 Crassula dichotoma is a delicate, erect, sparsely branched annual commonly reaching heights to 5 cm, occasionally to 15 cm or even taller in bloom. It had many botanical names over the years in the genera Crassula, Grammanthes and Vauanthes. Although minds were often changed about it, it was much seen and not ignored.

The small, yellow star-flowers feature here in the spring pageant of Namaqualand sand among bulbs, mesembs and felicias.

The species distribution is in the Northern Cape and the Western Cape, coastally from Namaqualand and the escarpment to the Cape Peninsula and Agulhas.

The plant grows on sandy fynbos flats and in succulent Karoo among shrubs. Although the population is decreasing due to development, farming and invasive alien plants, it is not considered to be threatened in its habitat early in the twenty first century (Frandsen, 2017; Smith, et al, 2017; Le Roux, et al, 2005; Manning and Goldblatt, 1997; iNaturalist; http://redlist.sanbi.org).