Home » GENERA C » Crassula » Crassula dependens
Back to Category Overview
Total images in all categories: 11,124
Total number of hits on all images: 5,797,876 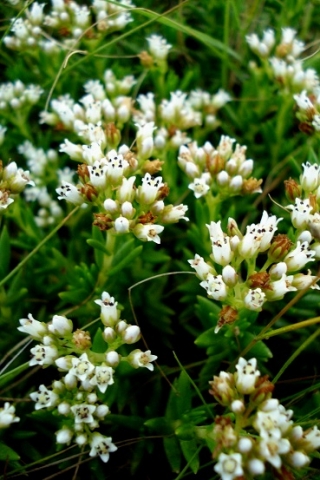 Crassula dependens is a much branched perennial with hair-like papillae or nipple-like protuberances along the stem surfaces. The fleshy green leaves are narrowly lanceolate with acute tips.

The plant bears small white or cream tubular flowers growing on short stalks. The petal lobes have triangular, recurving tips and tiny ridges on their outside surfaces. Dark anthers can be seen in the flower mouth. Green sepals with acute tips envelop the corolla in picture. Flowering happens from midsummer to early autumn.

The species distribution is widespread inland in the Eastern Cape, KwaZulu-Natal, Mpumalanga, the Free State, North West and Lesotho, with an isolated secondary distribution in Namibia. This plant was photographed during January east of Qacha’s Nek near the Lesotho border in KwaZulu-Natal.

The habitat is rocky hills in grassland. The species is not considered to be threatened in its habitat early in the twenty first century (JSTOR; iSpot; http://redlist.sanbi.org).