Home » TYPES » Shrubs » Limeum africanum
Back to Category Overview
Total images in all categories: 11,235
Total number of hits on all images: 5,944,966 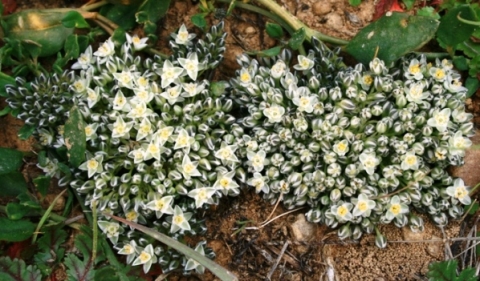 Limeum africanum or koggelmandervoet (rock lizard’s foot) in Afrikaans is a dwarf annual or perennial reaching heights from 20 cm to 35 cm. There are sometimes white scales on the stems. The much-branched, soft and slender stems are prostrate, bearing oblong to lanceolate and fleshy leaves on short petioles. The blue-green leaves become up to 3 cm long.

The green and white flowers appear in large numbers in short-stemmed cymes, the white-margined sepals conspicuous. A flower is about 7 mm in diameter. Flowering happens from late autumn to early spring.

The species distribution is in the Northern Cape and the Western Cape where the plants grow on dry, rocky slopes in sandy soils of karoid veld in the winter rainfall parts. Neither of the two subspecies is considered to be threatened in its habitat early in the twenty first century.

The plant is much grazed by game and stock. High prevalence is an indication that veld is well managed, not over-grazed (Le Roux, et al, 2005; Bond and Goldblatt, 1984; JSTOR; http://redlist.sanbi.org).