Home » TYPES » Herbs » Limeum africanum subsp. africanum
Back to Category Overview
Total images in all categories: 11,894
Total number of hits on all images: 7,136,452 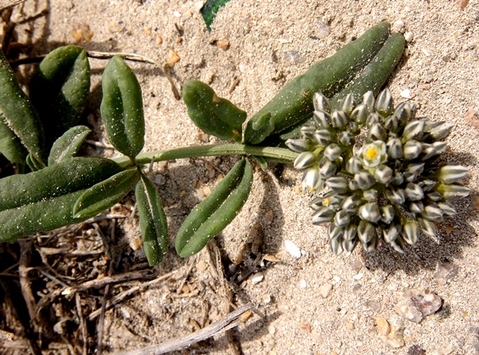 Limeum africanum subsp. africanum, in Afrikaans koggelmandervoet (agama foot), is a creeping annual or perennial. The thick root descends deeply into the sandy soil, probably bringing the plant its common name. The plant grows several prostrate, sparsely branched and sometimes scale-covered stems that radiate from the centre and become up to 35 cm long.

The short-stalked leaves are simple and alternate to sub-opposite. The leaf-shape is lanceolate or oblong to oblanceolate, the tips rounded or bluntly pointed, the base tapering. The margins are entire and rolled under. The midrib is sunken on the smooth, slightly fleshy and dark-green upper surface. The leaves become up to 3 cm long.

The subspecies distribution is in the west of the Western Cape and the southwest of the Northern Cape. The photo was taken near the beach at Tietiesbaai.

The habitat is dry rocky slopes where the plants grow in sandy soils. The subspecies is not considered to be threatened in its habitat early in the twenty first century (Le Roux, et al, 2005; Manning and Goldblatt, 1996; Bond and Goldblatt, 1984; JSTOR; iNaturalist; http://redlist.sanbi.org).