Home » TYPES » Herbs » Lasiospermum bipinnatum
Back to Category Overview
Total images in all categories: 12,086
Total number of hits on all images: 7,381,146 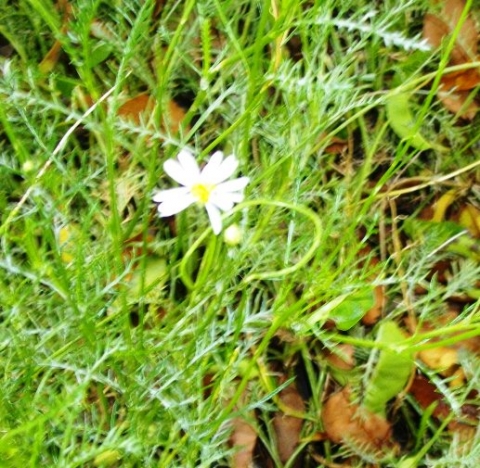 Lasiospermum bipinnatum, ganskweek (goose couch (i.e. grass)) in Afrikaans, is a perennial that grows to heights around 40 cm. Stems that branch much emerge from an herbaceous rhizome, the branches rooting at the nodes. The leaves are alternate and concentrated near the base.

The daisy flowers of L. bipinnatum have yellow central discs and white or purplish pink ray florets. They grow on peduncles from stem-tips. The plant usually flowers after rain.

The species occurs throughout South Africa but not in the far northeast from KwaZulu-Natal to Limpopo. It is found among various vegetation types, most commonly in wetlands like vleis and near watercourses. The plant is not considered to be threatened in its habitat early in the twenty first century.

This plant is toxic to livestock, having several harmful effects, but mainly causing liver damage. It is naturalised in California where it is known as cocoon-head.