Home » PARKS AND GARDENS » Tietiesbaai » Pteronia onobromoides, the sab bears yellow flowers
Back to Category Overview
Total images in all categories: 12,086
Total number of hits on all images: 7,387,194 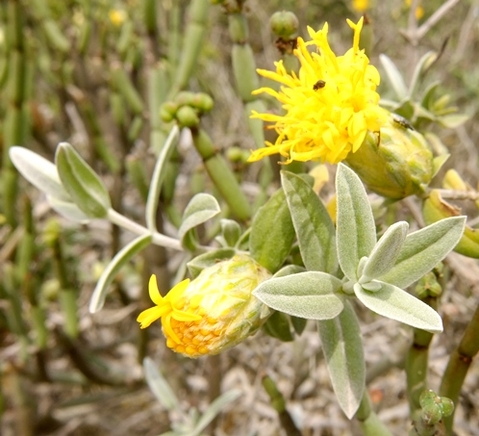 Pteronia onobromoides, (sab as the Khoi and Nama called it or Hottentotsboegoe as the colonist farmers did), grows opposite as well as alternate leaves. The leaves are stalkless and may clasp the stem.

The older head next to it has most or all of its florets open, the petal lobes lost in the tangle of particularly far extruded two-branched styles. There are many anthers present as well, five per floret and exserted but hard to discern among the numerous floral parts and maybe disappeared when the stigmas became dominant (Hulley, et al, 2010: Ethnobotany, leaf anatomy, essential oil composition and antibacterial activity of Pteronia onobromoides (Asteraceae). SA Journal of Botany 76(1):43-48; Le Roux, et al, 2005; Manning and Goldblatt, 1996; JSTOR; iNaturalist).