Home » PARKS AND GARDENS » Tietiesbaai » Senecio maritimus celebrating success
Back to Category Overview
Total images in all categories: 12,086
Total number of hits on all images: 7,387,138 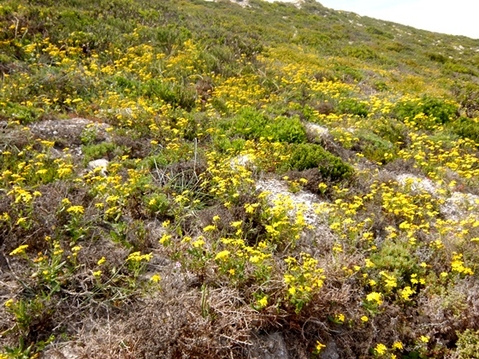 Senecio maritimus, a creeping to sprawling herb, announces its presence in temporary dominance of the available parts of this sandy slope. Where lasting shrubs have not usurped the territory for some years and the moles ploughed the sandy soil sufficiently for good aeration, the abundant yellow flowerheads of the annual stake their claim for this season.

Who knows what conditions, including rainfall and competitive vegetation might do to next year’s chances of the strandhongerblom (beach hungry flower)? The seeds are likely to be plentiful and the moles won't stop tilling (Manning, 2007; Manning and Goldblatt, 1996; Bond and Goldblatt, 1984; iNaturalist).