Home » TYPES » Mesembs » Lampranthus
Back to Category Overview
Total images in all categories: 10,504
Total number of hits on all images: 5,163,484 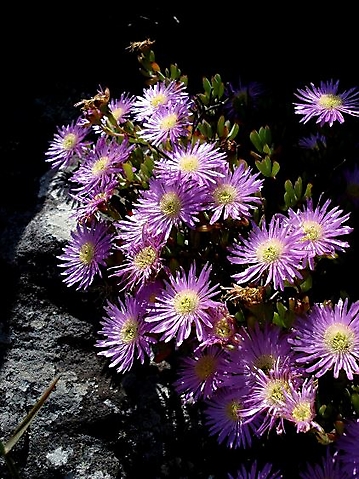 Lampranthus is a large genus in the Aizoaceae family of creeping to erect shrublets or shrubs bearing succulent, decussate leaves. The smooth, often compressed stems root at nodes in some species. The roots are fibrous, rarely thickened.

The equal leaf-pairs are sometimes slightly fused at the base. Leaves are terete (cylindrical) to triangular in cross-section, the tips blunt or tapering. The skins are more often smooth than rough, sometimes dotted or waxy but no water cells. Leaves may be up to 5 cm long.

The flowers grow solitary or in small, cyme-shaped clusters, usually stalked and varying in size from 7 mm to 70 mm in diameter. There are five sepals and numerous, free petals in many colours: white, yellow, orange, red or purple. The generic name, Lampranthus is derived from the Greek words lampros meaning bright and anthos meaning flower, reflecting the bright colours and often large flowers. (The Ruschia genus has only white or pink flowers.)

There may be staminodes present with the stamens, bunched in a cone to spreading. The nectary is a raised, toothed ring in the flower base. The ovary is flat or raised above, the placentas where the seeds grow on the inside of the outer walls. Flowering is mostly in spring and early summer, less common throughout the year.

The woody fruit capsule with funnel-shaped base usually has five locules, from four to seven. There are usually large valve-wings and diverging expanding keels. The covering membranes are thick and there are no closing bodies, but hairs block the outside ends of the locules. These hairs are funicles, the stalks of seeds that did not develop. The pear-shaped seeds are black or brown, often rough-surfaced.

There are about 220 Lampranthus species, mostly found in a broad coastal band along the west and south of South Africa. Some species occur in KwaZulu-Natal and southern Namibia. The plants grow in sandy places, some in shale or loam soils and others among rocks or higher sandstone slopes.