Home » TYPES » Mesembs » Lampranthus dependens
Back to Category Overview
Total images in all categories: 10,175
Total number of hits on all images: 4,836,477 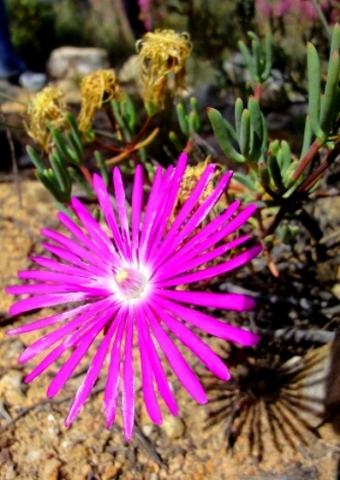 Lampranthus dependens, in Afrikaans the kransvygie (crag mesemb), is found in the Western Cape, the Little Karoo and to the east as far as the Baviaanskloof. It typically sprawls on fynbos mountain slopes from sandstone cliff edges. These plants cope with variable rainfall.

The opposite leaf pairs are erect and cylindrical, tapering abruptly to sometimes red tips. Leaf colour is grey-green to pale green, the leaves becoming up to 5 cm long.

The generic name of Lampranthus helps to characterise the flowers: the Greek words lampros (bright) and anthos (flower) describe the flashy flowers of many of the species. The pinkish purple flowers of L. dependens grow solitary on long stalks. They are large, opening to a diameter of 5 cm. The petals are white at the base. The central cone of filamentous staminodes and stamens is white, tinged with pink near the tips in the photo.

The woody fruit capsule has five locules that lack closing bodies, consistent with the features of the genus (Smith, et al, 1998; Vlok and Schutte-Vlok, 2010).