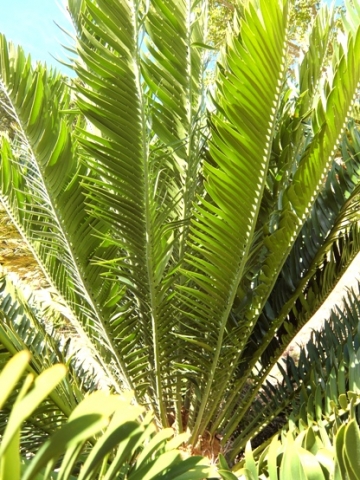 Previous
Image 1 of 80
Next

Encephalartos aemulans, the Ngotshe cycad, grows an erect and unbranched stem of typical height around 1,5 m, occasionally 3 m (SA Tree List No 14.5). The tree-like plant usually suckers from the base.

The crown or top of the stem is densely covered in brown wool. The plant grows two to four cones per stem, especially the male cone base buried in the stem, thus without peduncle.

Male and female cones of this species are almost indistinguishable, similar in circumference. Both cones are woolly from a covering of pale to dark brown hairs. The adjective denoting this species, aemulans, means equalling in Latin, referring to this similarity of the pollen and seed cones. The male cone may show a slight lemon-yellow colouring while the female one tends to green. The upper facet of a cone scale is rhombic in shape, protruding markedly; the lateral facets have a covering of glandular hairs and radiating warty ridges.

The distribution of this cycad in nature is so small that the plant is inevitably vulnerable. It only grows in a part of the Vryheid district of KwaZulu-Natal. Ngotshe is the Zulu name of Louwsburg, a small town near Vryheid in the north of the Province. The habitat is south-facing sandstone cliffs in short grassland where only the small plants will grow in shade.

The species is critically endangered in its habitat early in the twenty first century (Hugo, 2014; Coates Palgrave, 2002; www.iucnredlist.org; www.cycadsociety.org).