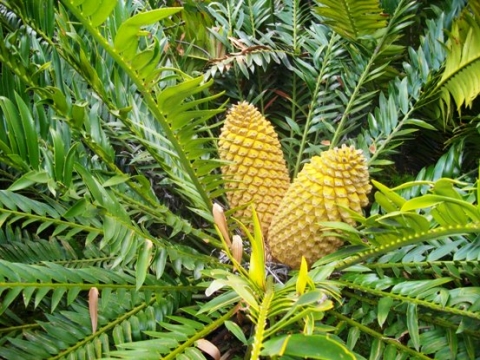 Previous
Image 5 of 80
Next

The seed cones of Encephalartos altensteinii commonly grow in groups of up to three, rarely as many as five at a time. These female cones are slightly longer than the male ones, but considerably wider and more barrel-shaped. The cone colour of this species is golden yellow when mature, although some remain faintly tinged with green, possibly caused by being positioned in semi-shade.

Each cone is based on a sturdy peduncle or stalk of up to 10 cm. The seeds released later from these cones are scarlet and 2,3 cm long. Pollen cones (i.e. the male ones) are cylindrical with a little tapering at the apices (www.cycadsociety.org; Coates Palgrave, 2002).