Home » GENERA B-C » Brunsvigia » Brunsvigia elandsmontana
Back to Category Overview
Total images in all categories: 9,892
Total number of hits on all images: 4,585,753 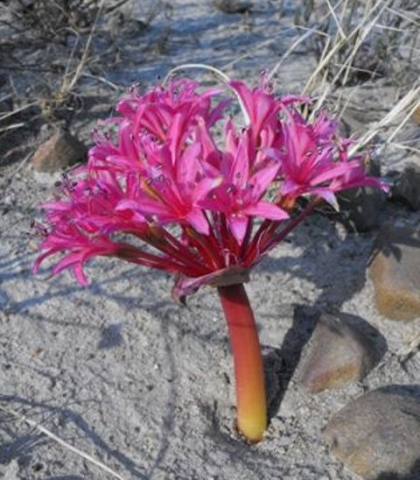 Previous
Image 1 of 29
Next

Brunsvigia elandsmontana is a recent addition to the about 20 recorded species of the genus. It has only a tiny distribution area in the Elandsberg Private Nature Reserve, about 25 km north of Wellington in the Swartland region of the Western Cape. Only about 700 specimens of this rare plant have been found in its known habitat. The wellbeing of this species is thus inextricably entwined with the sustainability of the Elandsberg Reserve, now that the western renosterveld has largely been ploughed and lost to natural vegetation and biodiversity (www.earth-touch.com).

Some brunsvigias, especially those of the winter rainfall area, i.e. also B. elandsmontana, display the hysteranthy phenomenon. This means that the plant presents its functional parts at different times of the year and not concurrently. This starts with no part of the plant being visible above-ground while it is dormant in summer (barring dead leaves from the previous year maybe).

Then, in autumn the solitary flower stalk pushes up from the bulb, with two big bracts opening at the top to release the individual flower buds. The individual flowers, each with six recurving tepals, develop next into a large and spectacular umbel. Once the flowering is done and the fruits have ripened, the dry, spherical seed-head is released and driven away by the wind to disperse its seeds in tumbleweed fashion.

Only after that do the leaves appear, with the onset of first winter rain. The leaves dry out when the bulb is replenished and disappear in spring (Wikipedia; www.plantzafrica.com).