Home » GENERA B-C » Brunsvigia » Brunsvigia herrei among rocks
Back to Category Overview
Total images in all categories: 9,892
Total number of hits on all images: 4,585,750 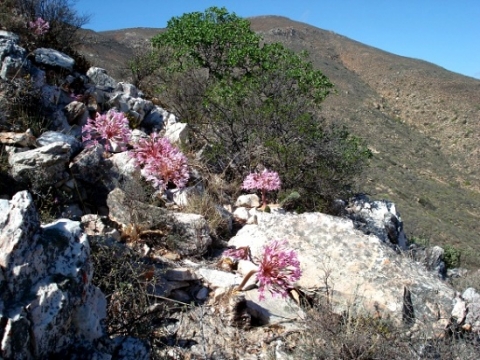 Previous
Image 2 of 29
Next

The habitat of Brunsvigia herrei is rocky hillsides and flats in granitic soil, mainly at higher altitude. In the case of the little stand in the photo, the plants grow among boulders. B. herrei often grows in deep soil, although still allowing the top part of the bulb to protrude above ground. The distribution area of the species lies from northern Namaqualand through the Richtersveld into southern Namibia. This region is characterised by low rainfall and extreme temperatures.

In recent times the plant has become threatened by habitat degradation through grazing by goats and plant collection for medicinal purposes and horticulture. Its population in nature is decreasing.

Brunsvigias are mainly slow growing and are not much used as cut flowers. Several Brunsvigia species are popular as ornamental plants in many countries among specialist bulb growers. In some countries climate restricts this to greenhouses (Williams, 2010; www.plantzafrica.com).