Home » GENERA T-Z » Tylecodon » Tylecodon pygmaeus
Back to Category Overview
Total images in all categories: 11,921
Total number of hits on all images: 7,168,658 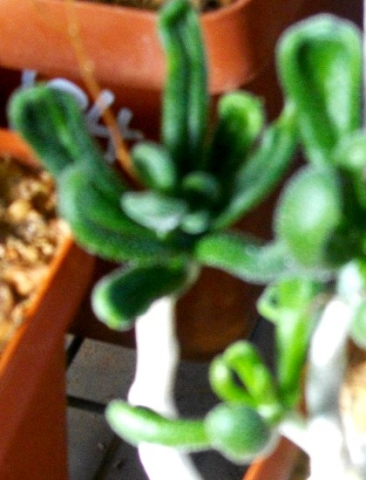 Tylecodon pygmaeus, in Afrikaans commonly referred to as the dwergbotterboom (dwarf butter tree), is a deciduous stem and leaf succulent becoming only about 8 cm tall. The underground tubers are short and branched. One or more erect stems are grown, smooth and stubby with yellow bark, up to 1 cm in diameter.

The thickly succulent leaves are oblong to obovate, 2 cm long and 7 mm wide, slightly channelled or concave on their upper surfaces. Leaf colour is dark green, dark red to purple depending on seasonal conditions. The leaves are densely covered in whitish, scale-like or stubbly hair. The leaves are alternate and deciduous.

The inflorescence bearing one to three flowers in late spring or early summer has glandular hairs upon its stalk. Flower colour is pale yellow-green with a tinge of pink. The distribution is the Knersvlakte and southern Namaqualand where the plant grows exposed on flats or gentle slopes among white quartzite pebbles. The species is not considered to be threatened in its habitat early in the twenty first century (Le Roux, et al, 2005; iSpot; Wikipedia; www.redlist.sanbi.org).