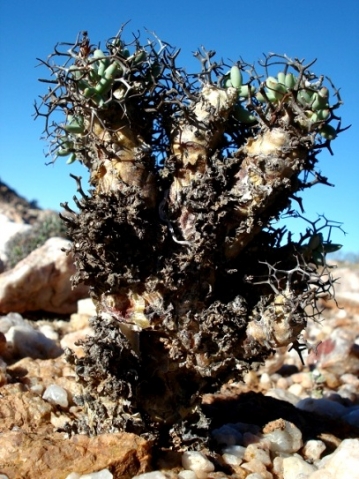 Another common name in Afrikaans is sifkop (sieve head), referring to the persistent old flower-stalks (and dehisced fruit husks) that form a mesh-covering of dry sticks over the succulent leaves that grow annually from branch-tips.

The calyces of the flowers also tend to remain on these stalks, becoming loose dry rings below the fruit husks that prevent them from dropping off. These little rings run up and down the stalks like beads or insects in the wind. This movement deters browsers, unfamiliar with beads, as a mouthful of angry ants would be widely unappetising to most. Unless you are an ant-eater and unlikely to browse.

The subspecies distribution is widespread from Namibia and Namaqualand where this specimen was photographed, to the Karoo and Little Karoo, as far as Graaff-Reinet and Willowmore.

The habitat is varied, semi-arid scrubveld and succulent Karoo. The plants grow in loam or clay soils. The subspecies is not considered to be threatened in its habitat early in the twenty first century (Smith, et al, 1997; Vlok and Schutte-Vlok, 2015; http://redlist.sanbi.org).