Home » GENERA P » Pachycarpus » Pachycarpus campanulatus var. sutherlandii flowers from above
Back to Category Overview
Total images in all categories: 12,061
Total number of hits on all images: 7,359,566 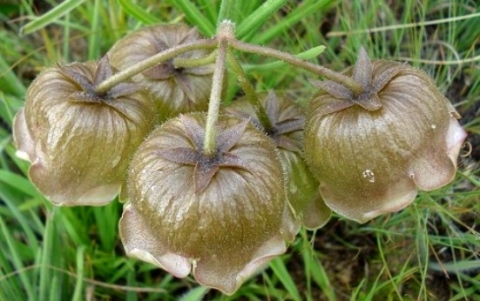 Previous
Image 1 of 26
Next

Seen from above, the nodding umbel of Pachycarpus campanulatus var. sutherlandii flowers present the shiny, semi-spherical, beige-brown and hairy corollas. Corolla lobes are joined nearly to the edge of the flower cup where their tips begin to curve outwards. The small, acutely tipped sepals or calyx lobes form a brown star-shape at the back of the corolla. The pedicel is hairy.

Flowering happens in late spring and through summer. Apart from the variety of the species presented here, there is also a less common one, P. campanulatus var. campanulatus that has a bigger flower. The species is believed to have a stable population in nature early in the twenty first century (iSpot; www.redlist.sanbi.org).