Home » GENERA I-L » Lachenalia » Lachenalia pallida
Back to Category Overview
Total images in all categories: 8,897
Total number of hits on all images: 3,868,118 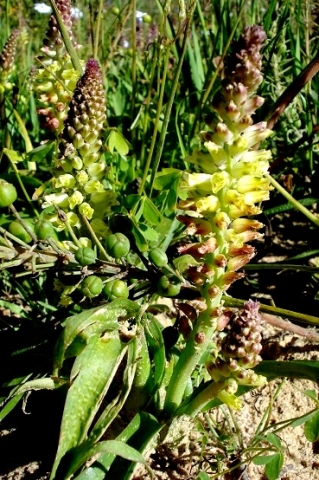 Lachenalia pallida, in Afrikaans commonly known as the bleek viooltjie (little pale violin), is a bulbous perennial that annually grows one or two lanceolate leaves that may become warty. The plant grows to heights from 12 cm to 30 cm and blooms in late winter to midspring.

The cream to yellow flowers are produced in an erect raceme on short pedicels. The flowers are cylindrical with brown or green corolla markings. Anthers are not exserted.

Plants are found in large colonies in the south-western Cape, growing in clayey soils. This photo was taken in August near Clanwilliam. While there are still large stands of these flowers at the end of the rainy season, the populations are declining due to wheat farming, grazing, urban development and quarrying (Manning, 2007; iSpot; www.redlist.sanbi.org).