Home » GENERA G-H » Hesperantha » Hesperantha vaginata flower
Back to Category Overview
Total images in all categories: 9,765
Total number of hits on all images: 4,385,469 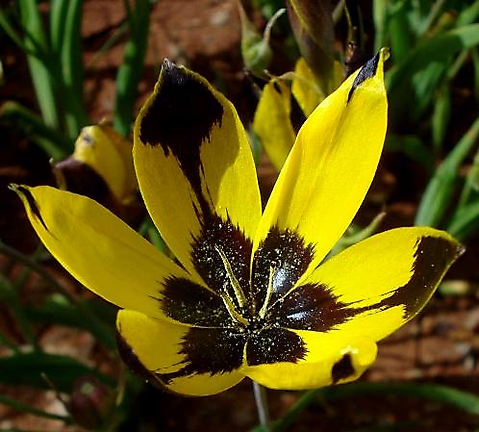 The large, cup-shaped, yellow flower is often marked brown in the eye and on the outer tepal tips, only slightly on the tips of the inner ones. The dark parts may be nearly black, dark brown or purplish brown. The daily furled tepals display much dark colouring and very little yellow. Flower diameter is about 3 cm.

The three long, thin stamens angling out from the flower centre are cylindrical, thinning to their tips. The pollen in picture is pale grey. The hopline scarab beetle, Clania glenlyonensis, a kind of monkey beetle pollinates the flowers while feeding on pollen.

The beetles are attracted by the dark markings on the tepals. No wonder that the unmarked flower form is disappearing from the population in habitat. These flowers bear no nectar.