Home » GENERA G-H » Hesperantha » Hesperantha vaginata
Back to Category Overview
Total images in all categories: 9,976
Total number of hits on all images: 4,686,079 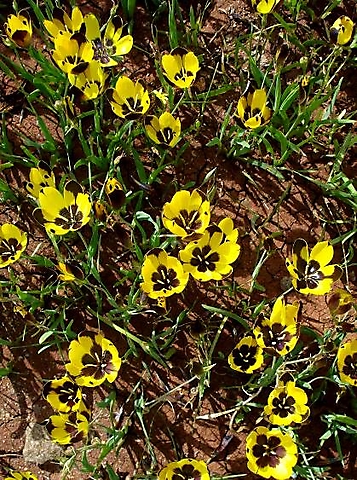 Hesperantha vaginata, commonly the harlequin evening-lily, is a cormous perennial reaching heights from 12 cm to 18 cm. The perennial component of the plant is the small, subterranean corm that is fibre-covered with a flattened base.

The harlequin association relates to the common bicoloured flower version of the species. There is (or was) a monocoloured yellow form seen near Nieuwoudtville. Evening comes into the name as these flowers only open in the afternoon on warm enough days, closing at dusk.

The species distribution is small in the southwest of the Northern Cape, on the Bokkeveld Plateau and flats towards Calvinia.

The habitat is arid fynbos and succulent Karoo in heavy clay soils, derived from dolerite. Some of these soils have a high content of expansive clayey minerals that form deep cracks in dry seasons (vertisol soil). Although the plant population is deemed stable, the species is considered to be near threatened in its habitat early in the twenty first century.

Its prospects are dimmed in Catch-22 manner by farming on the one hand as the clay flats may be ploughed if rains permit and on the other hand by climate change as the plants only flower well after good rains (Manning and Goldblatt, 1997; iNaturalist; Wikipedia; http://pza.sanbi.org; http://redlist.sanbi.org).