Home » GENERA D-F » Erepsia » Erepsia anceps
Back to Category Overview
Total images in all categories: 9,569
Total number of hits on all images: 4,299,532 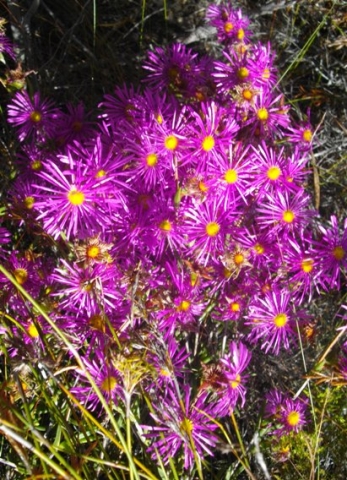 Erepsia anceps grows semi-erect branches forming a small shrublet about 30 cm in height. The leaves are widely spaced along the stems, the solitary flowers at branch ends.

This is one of several species commonly known as altydvygies. A flower consists of a whorl of narrow, spoon-shaped, pink or magenta petals around a yellow centre. The flower centre comprises a dense cluster of staminodes (infertile stamens without anthers), the real stamens and styles hidden from sight among them.

This plant is found in the far south-western parts of the Cape, from the Cape Peninsula. It grows on lower sandstone slopes (Smith, et al, 1998; Manning, 2007).