Home » GENERA D-F » Erepsia » Erepsia bracteata
Back to Category Overview
Total images in all categories: 8,883
Total number of hits on all images: 3,863,588 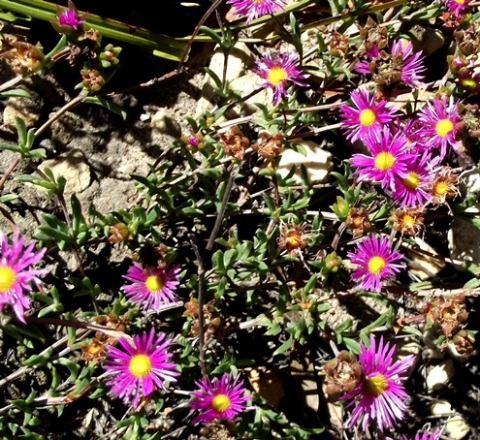 Erepsia bracteata is a shrublet that branches sparsely from the base. Its stems become 2 mm to 4 mm in diameter.

The succulent, opposite leaves are triangular in cross-section, slightly fused at the base, sometimes bulging in the centre and tapering to pointed tips that curve outwards. The leaf surfaces are covered in glassy, translucent dots that let light into the succulent leaf body.

The solitary flowers have a ring of magenta petals around yellow centres dominated by staminodes, i.e. antherless, sterile stamens under which the proper stamens and styles are concealed. Leaf-like bracts grow below the sepals. The generic name, Erepsia, derived from the Greek word erepto or erepho meaning roofed over or crowned, refers to the staminode cover of the reproductive floral parts, a feature of the Erepsia genus.

Monkey-beetles dig through the staminode coverings on Erepsia flowers in search of food, collecting and discarding pollen as they go. Details of dutiful courier agents seldom matter to their clients, the colour of the postman’s eyes (usually) go unnoticed. These flowers remain open at night, being one of the altydvygies (ever mesembs). Whether monkey-beetles do business of any kind at night is not known.

Flowering happens from midsummer to mid-autumn. The photo was taken at the end of February. The fruit is 6 mm to 8 mm in diameter, comprising five locules.

The species grows in the far southwest of the Western Cape on rocky sandstone slopes from Clanwilliam to Walker Bay and Swellendam. The photo was taken in Fernkloof. The species is not considered to be threatened in its habitat early in the twenty first century (Privett and Lutzeyer, 2010; Herre, 1971; Andrew, 2017; iNaturalist; http://redlist.sanbi.org).