Home » GENERA D-F » Euryops » Euryops subcarnosus
Back to Category Overview
Total images in all categories: 9,406
Total number of hits on all images: 4,226,559 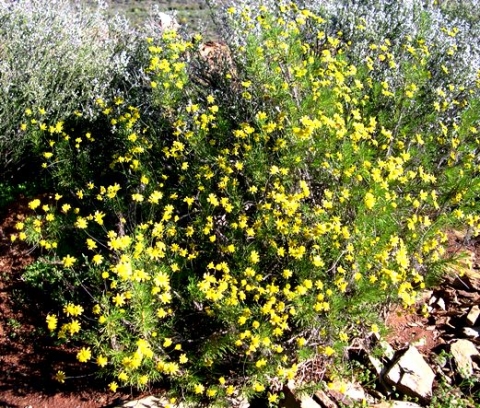 Euryops subcarnosus, in Afrikaans commonly the soetharpuis (sweet resin), is a variable, spreading shrub growing from a single stem, reaching heights to 1 m; in some regions notably less.

The species distribution lies from Namibia in the north through the Northern Cape to the Western Cape. The photo was taken near Oudtshoorn in the Little Karoo.

The habitat is clay soils in arid and semi-arid regions among various vegetation types. The species is not considered to be threatened in its habitat early in the twenty first century, i.e. of the four subspecies three are of least concern, the status of the fourth, subsp. minor only found in a part of Namaqualand, is unsure due to lack of information.

The plant in picture may in terms of where it was found either be the most widespread subspecies, subsp. vulgaris, or subsp. subcarnosus, the only other one occurring in the Western Cape. Subsp. vulgaris may have shorter leaves though than the plant photographed (Vlok and Schutte-Vlok, 2010; JSTOR; Shearing and Van Heerden, 2008; www.redlist.sanbi.org).