Home » GENERA D-F » Euryops » Euryops tenuissimus
Back to Category Overview
Total images in all categories: 9,141
Total number of hits on all images: 4,084,887 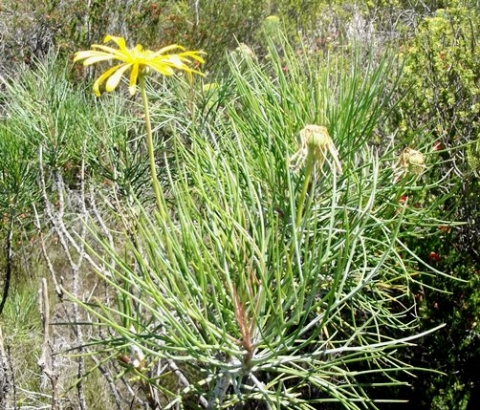 Euryops tenuissimus, in Afrikaans commonly known as the grootharpuisbos (large resin bush), is an erect, willowy shrub reaching heights up to 2,5 m.

The flowerheads are solitary, forming flat-topped clusters on wiry peduncles among or just above the leaves. Flowerheads have one whorl of yellow or orange ray florets around a small, dense cluster of yellow disc florets. A flowerhead becomes up to 1 cm in diameter.

Flowering happens from late winter to mid-spring. The fruits are hairy, becoming sticky or slimy when wet; the seeds small and hairy.

The distribution is from Namaqualand to the southern Cape. The plants grow on semi-arid, sandstone slopes. The plant is not considered to be threatened in its habitat early in the twenty first century (Manning, 2007; www.redlist.sanbi.org).