Home » GENERA B-C » Cyphia » Cyphia crenata flower
Back to Category Overview
Total images in all categories: 9,121
Total number of hits on all images: 4,075,232 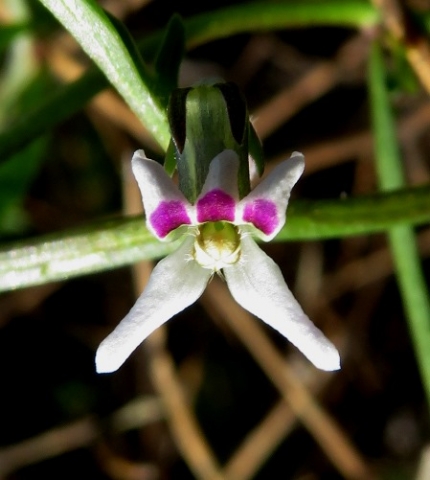 The nodding flowers of Cyphia crenata grow solitary or in clusters of up to five from upper leaf axils.

The two-lipped flower with swollen corolla base has its corolla tube split on the sides down to the base. Flower colour is white, mauve or a bit of both. The upper lip is three-lobed, the lobes attached to each other in their lower parts. In picture these upper lobes are reflexed and marked in mauve.

The lower lip comprises two lobes or petals that are free, in picture also from mauve markings. The corolla is about 1 cm long. The stamens are white-bearded, the ovary partly inferior.

Flowering happens from before midwinter to early spring. The photo was taken in August (Manning, 2007; Le Roux, et al, 2005; Manning and Goldblatt, 1996; iSpot).