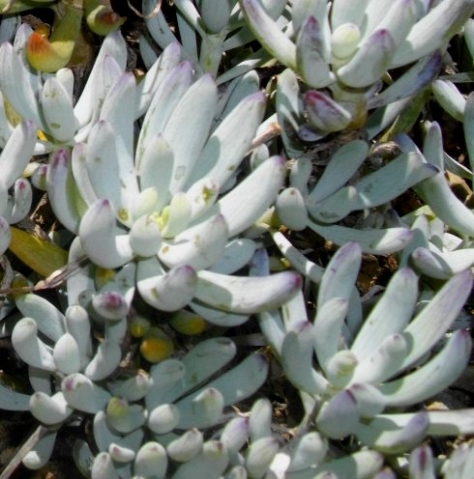 The flowerheads grow solitary on long, erect, fleshy stalks above the leaves. They have cup-shaped involucres comprising one row of cohering, fleshy bracts, channelled where they join each other and sometimes purplish. The tiny tuft of disc florets is yellow, appearing from late spring to autumn. Some records say they are white. A few tiny stem leaves are widely spaced up the flower stalks.

The species is distributed from the Cape Peninsula to Caledon. The plants are found on rocky sandstone slopes growing among fynbos from crevices. The extent to which the future of the species is secure in its habitat is unknown as data is lacking, the plant being taxonomically problematic. The photo was taken in the Royal Botanic Gardens Victoria in Melbourne, Australia (Van Jaarsveld, et al, 2006; Bond and Goldblatt, 1984; iSpot; http://redlist.sanbi.org).