Home » GENERA B » Buddleja » Buddleja saligna in flower
Back to Category Overview
Total images in all categories: 11,779
Total number of hits on all images: 6,931,963 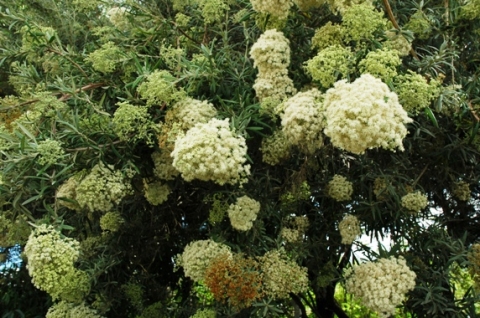 Previous
Image 8 of 18
Next

Flower colour is white or cream, sometimes with a little red in the corolla throat from which the anthers are exserted. There is a four-lobed, hairy calyx at the back. Each flower has four corolla lobes and four stamens. The two-locular ovary is superior. The flowers are small, a flower becoming about 4 mm long.

In picture the inflorescences range from greenish young ones to brown withered ones. Each inflorescence bears flowers of roughly the same age. The whiter ones at their flowering peak tend to be biggest as the corollas open. The brown ones are less dense as the corollas drop off and only the calyces remain in the spread panicle around the developing fruit. The brown capsule is about 2 mm long.

Flowering happens from late winter until after midsummer. The fruits are seen on the tree from spring to to early autumn (Coates Palgrave, 2002; Schmidt, et al, 2002; Van Wyk and Van Wyk, 1997).