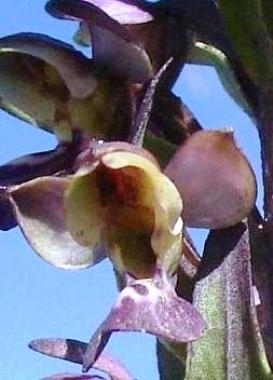 Spring and summer flowers of Brachycorythis ovata subsp. ovata are seen in open grassland of the eastern regions of South Africa from the Eastern Cape to Limpopo, also in Swaziland. The lateral sepals are large and whitish on the inside, hairy with inconspicuously pointed tips. The lip is slightly three-lobed at its tip. This flower was seen in January.